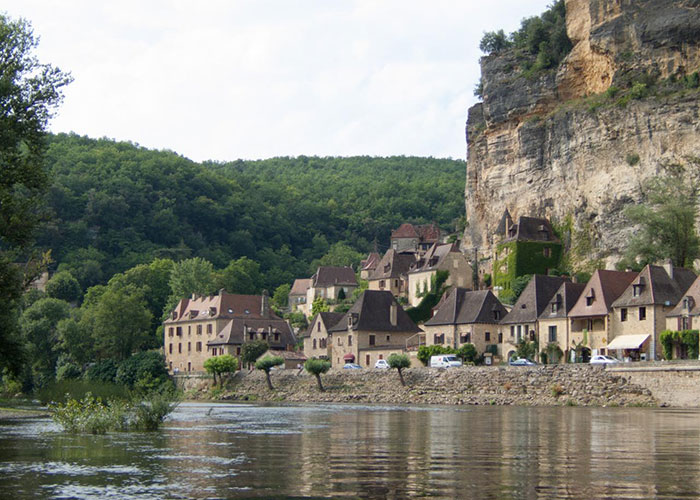 The Dordogne département is the picture-perfect image of the French countryside, a gentle landscape of hills, hilltop towns, turreted mansions and green woods. Named after the river.

The Dordogne is better-known to the French as Périgord, spiritual home to three of the country's enduring culinary passions – foie gras and the black truffle, not forgetting Monbazillac, - a sweet white wine famously consumed with foie gras.

The Dordogne is famous for its stunning cave paintings, such as those at Lascaux as well as for its many fortified chateaux and bastide towns – reminders of the battles waged here during the Middle Ages and the Hundred Years' War. The British lost that war, but have to an extent reclaimed the area by stealth.

Périgord has been divided into four colour-coded areas: in the centre, the area around the capital, Périgueux, is known as Périgord Blanc (white) after its pale limestone hills. The fields and forests to the north and northwest are known as Périgord Vert (green), while the wine-growing area of Périgord Pourpre (purple) lies to the southwest, around Bergerac. Le Manoir De St. Marcel sits just inside this area.

Périgord Noir (Black) - Some say named after the economy there; encompasses the Vézère Valley and the upper Dordogne Valley, as well as the beautiful medieval town of Sarlat.

The Dordogne area is renowned for its long hot summers, the warm and pleasant weather usually extending from April to late October. When you arrive, you will find plenty of vineyards to try wine at. However for price & a good selection I recommend Leclerc supermarket & Julien-de-Savignac for a greater choice, also at good prices. Julien-de-Savignac have shops at Le Bugue & Monbazilac.

When Nancy & I selected Le Manoir De St. Marcel for you in 1999, we chose firstly the area: Dordogne, Then the local area. To the East of Bergerac, near to the actual river Dordogne. The northern quarter of Périgueux isn't called "Green" for nothing! It is decidedly cooler & wetter the further North one goes. We are well-placed for your visit to a vineyard. – There are no appellations to the East of us. Ideal for visits to Domme, Sarlat, but also to Issigeac for their year round Sunday market. Finally: "The locale" – We are on the South facing side of a gently sloping valley. This ensures that you enjoy pleasant views & the best weather in the area.

Truly! - Le Manoir De St. Marcel is the ideal spot for your holiday in France!